The A-11 sailplane flown by S.N. Anokhin made the first flight in July 1957. The A-11 is a single-seat aerobatic trainer designed to perform record-breaking long-range flights. Flaps, drooped ailerons and speed brakes provided on the wing significantly expanded the range of possible flight conditions, facilitated spiral soaring (spinning) in the updrafts, and also simplified take-off and landing. A total of 200 A-11 gliders were serially built at the aircraft manufacturing facility in the city of Komsomolsk-on-Amur. Four national records were set on the A-11 sailplane. The A-11 sailplane served as a basis for development of the A-11M (An-11M) jet-powered sailplane with TS-31M engine designed by A.M. Liulka. The А-11 aerobatic sailplane was turned into the A-13 soaring glider by simple replacement of the long wing with the shorter one. The first flight of the new glider took place on July 2, 1957 under the control of A.Y. Manotskov. The A-13M (An-13M) jet-powered sailplane, which made its first flight in 1959, was also developed on the basis of the A-13. It was mainly intended to improve conditions of flight personnel training when executing aerobatics. With one towing to the height, the A-13M was capable to execute seven stages of acrobatic maneuvers moving upwards after each of them by turning on the jet engine. Like the A-11, a total of 200 A-13 sailplanes were built at the same aircraft manufacturing facility in Komsomolsk-on-Amur. A-11 and A-13 were the first Soviet all-metal gliders and the world’s first all-metal gliders with the V-shaped tail unit. 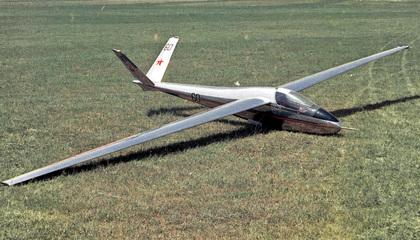