ANTONOV COMPANY is invariably associated with the name of its founder, because the name of this person has forever been included in the history of aviation and has become symbolic

In the aviation, the interconnection of technical perfection with beauty is especially noticeable. O.K. Antonov 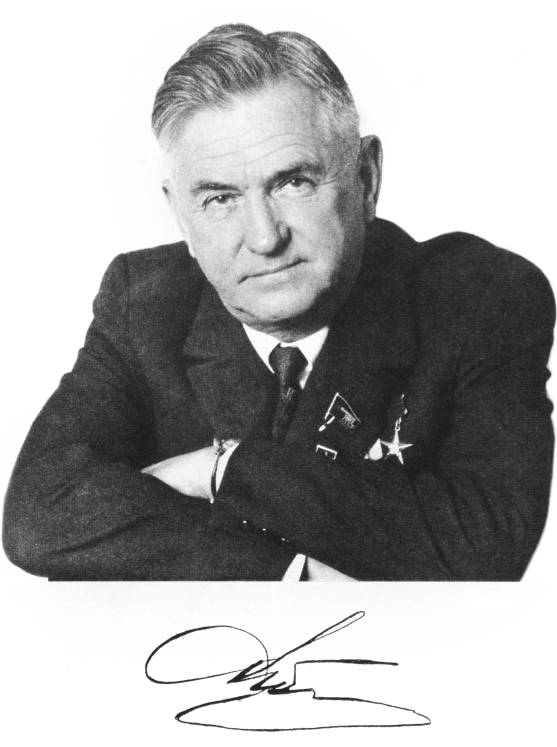 Oleg Konstantinovich Antonov was born on the 7th of February 1906 in the village of Troitsa, Podolsk district of the Moscow region in the family of a civil engineer. Owing to his father’s engineering library, the future aircraft designer was familiar with mechanisms and calculations from his early years. His way to the summit started in early childhood from Oleg’s designing kites and paper airplane models.

Since 1923, O. Antonov was active in the Saratov Branch of the Air Fleet Friends Society. Here Oleg started constructing gliders of his own design. In 1924, he designed and built the OKA-1 Golub (The Dove), which was awarded with a diploma for original design at the Second All-Union Gliding Tests in the Crimea. At the same time, Antonov’s first papers “Why Do We Need Gliders” and “The Paper Models of the Simplest Glider” were published. In 1925, Antonov entered the shipbuilding department, division of hydraulic aviation, in the Leningrad Polytechnic Institute. During the period of his university studies, Antonov constructed training gliders: OKA-2, OKA-3, Standart, Standart-2 (OKA-5) at the Osoaviakhim (Aviation Public Assistance Organization). Having graduated from the institute in 1930, Oleg Antonov was working as head of design bureau of the glider workshops and as engineer of Factory No. 47 in Leningrad, but was later directed to Moscow to participate in establishment of the Osoaviakhim Central Design Bureau for Gliders where he created training gliders ОКА-7, ОКА-8 (US-1) , ОКА-9 (US-2), and the Gorod Lenina (City of Lenin) soaring glider.

In 1938, O. Antonov was appointed leading designer of A.S. Yakovlev’s Design Bureau (Plant No. 115). In 1940-41 he headed design bureau of Plants No. 23 and No. 380 in Leningrad, designing the ОКА-38 Aist (The Stork) communications airplane (CA). In 1941 he becomes Chief Designer of Plant No. 465 in Kaunas, Lithuanian SSR, and in July – Chief Designer in Moscow and Tyumen, designing and constructing the А-2 twin-seat training glider and the KT (Winged Tank) glider. During the period of 1943 through 1945, O.K. Antonov occupied the post of Deputy Chief Designer to A.S. Yakovlev and took part in the development of the light and most maneuverable soviet fighter of the Second World War – the Yak-3. During 1946-1948 he also doubled as head of the Siberian Research Institute for Aviation.

Starting from May 1946, O.K. Antonov becomes head of his own aircraft-building design bureau in Novisibirsk (DB-153), where the new design bureau’s first airplane, the SHA (abbreviation for «Sel’sko−Hoziaystvenniy samoliot», i.e. «agricultural airplane»), took off for its first flight on the 31st of August 1947. In 1948 the airplane was launched in series production at Kyiv Aviation Plant under the designation AN-2. It is the only biplane in the world which has been continuously manufactured and still remains in mass operation these days. In the USSR the aircraft was produced at aircraft manufacturing plants in Kyiv and Dolgoprundyi (Russian Federation). It was also manufactured under license in China (since 1956) and Poland (since 1959). Originally designed as an agricultural aircraft, the AN-2 was produced in six official modifications and dozens of specialized versions.

In 1952, Oleg Antonov and his design bureau team move to Kyiv, where they had to re-establish the office team and the production facility practically from scratch. During that period of time, the design bureau team was joined by a large group of graduates of Kharkiv Aviation Institute, as well as aviation specialists from Kyiv, Moscow, Leningrad and other cities. Further research and scientific activities of Oleg Antonov were basically focused on the development and construction of the military transport, cargo, passenger, and multi-purpose airplanes. During the 1950s, Antonov was at the head of the development and construction of the AN-8 transport airplane (1956), AN-10 Ukraina (Ukraine) passenger airplane, AN-12 military airlifter (1957), AN-14 Pchiolka (Little Bee) multipurpose short takeoff and landing aircraft (1958), and AN-24 passenger airplane (1959) with the welded/bonded elements widely used in its structure for the first time in the world.

In the period of 1960-1965, the AN-22 Antei (Antheus) world’s first super-heavy wide-body transport airplane was developed. The aircraft later set 41 world aviation records. One of the fundamental principles of the Antonov Design Bureau’ creative activity was the aircraft structural commonality. Thus, the AN-14М and AN-28 airplanes were developed on the basis of the AN-14 (in 1973), the AN-30 aerial photography airplane was designed on the basis of the AN-24 (in 1967), as well as the AN-24Т (1965) and AN-26 (1969) transport airplanes and the AN-32 transport for hot-and-high operating conditions(1976). Airplanes of the Antonov family were built at a number of manufacturing facilities in Kyiv, Kharkiv, Irkutsk, Voronezh, Ulyanovsk, Novosibirsk, Arsenyev, Dolgoprudnyi, Omsk, Tashkent, Ulan-Ude, Mieleс (Poland), Shijiazhuang and Nanchang (PRC). The last airplane developed under the guidance of Oleg Antonov was the AN-124 Ruslan – the world’s largest production military transport airplane (1982) designed to carry 150 tons of cargo. In November 1965, Antonov signed an open letter to the CPSU Central Committee protesting against political repressions against representatives of the artistic intelligentsia of Ukrainian SSR and discrimination of the Ukrainian literature. As long as he lived, Antonov was putting incredible effort in restoring the memory of Igor Sikorsky in the history of Ukrainian aviation.

O.K. Antonov died on the 4th of April 1984. He is buried at Baikove Cemetery in Kyiv. 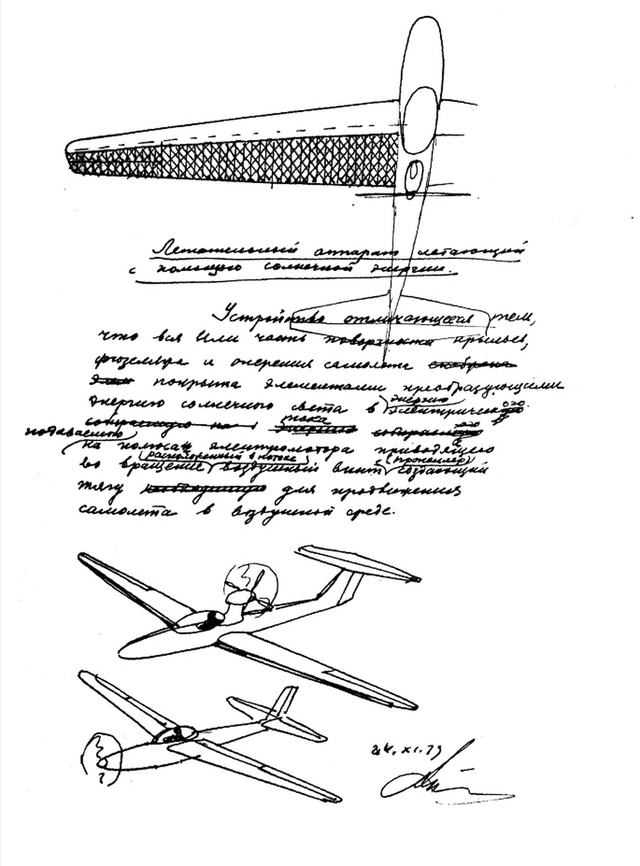 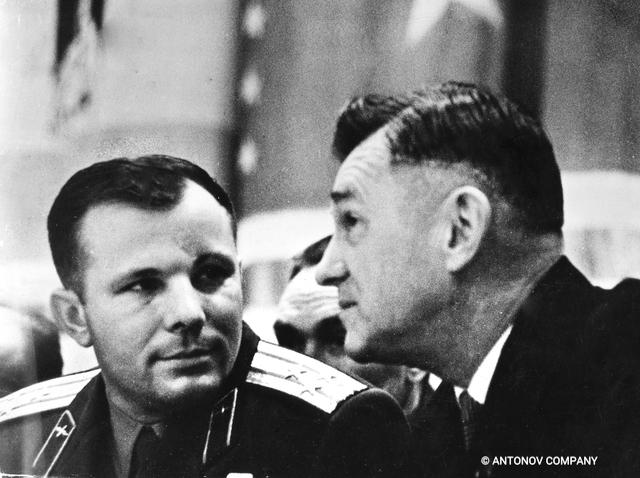 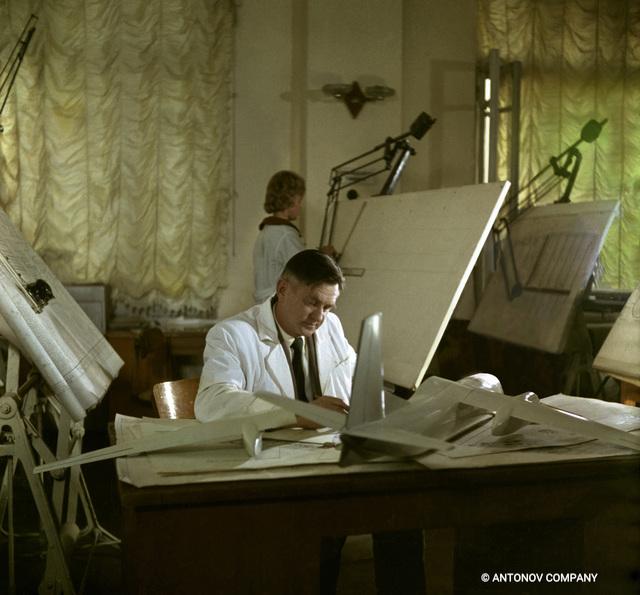 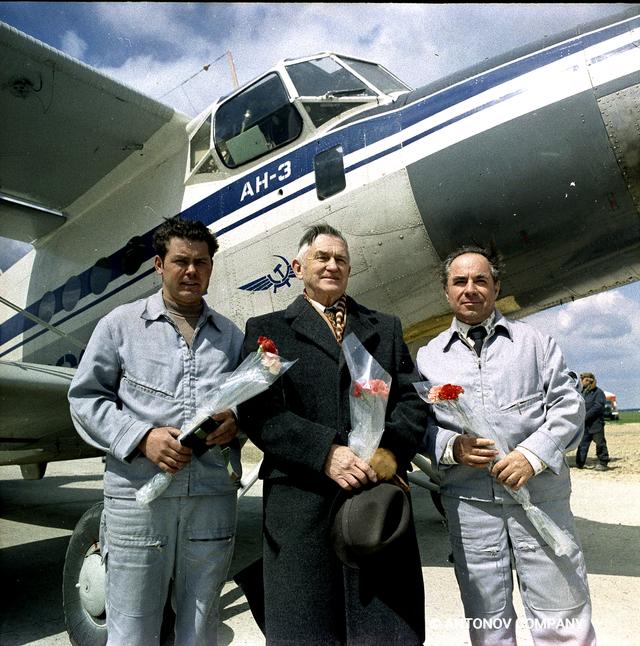 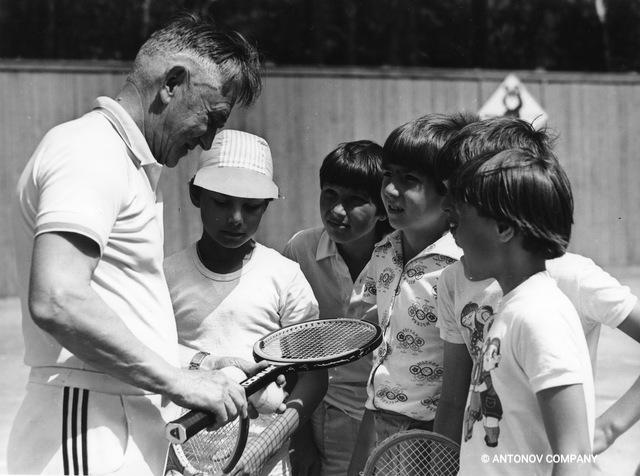 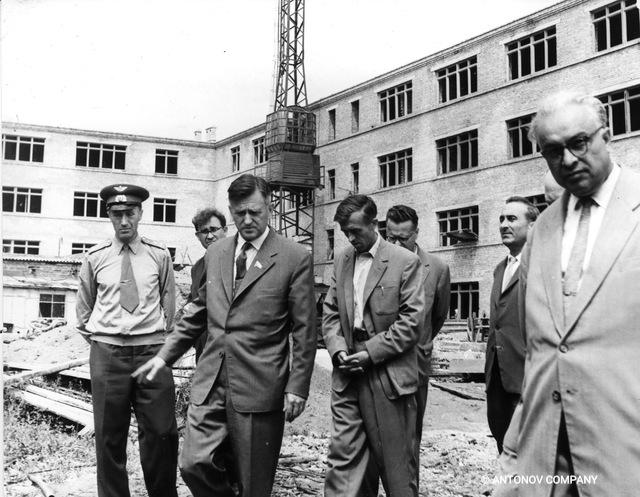 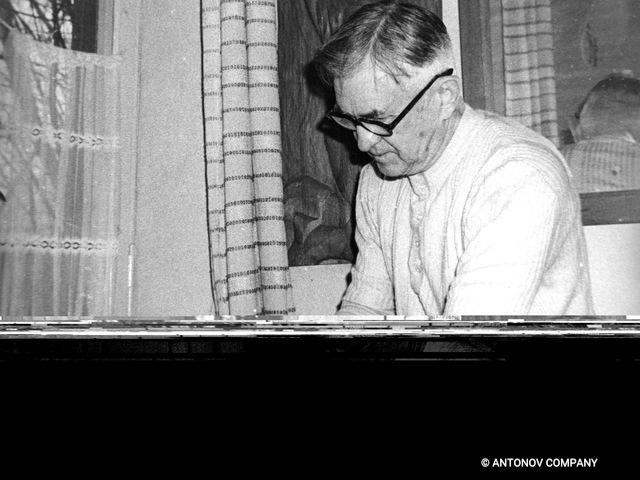 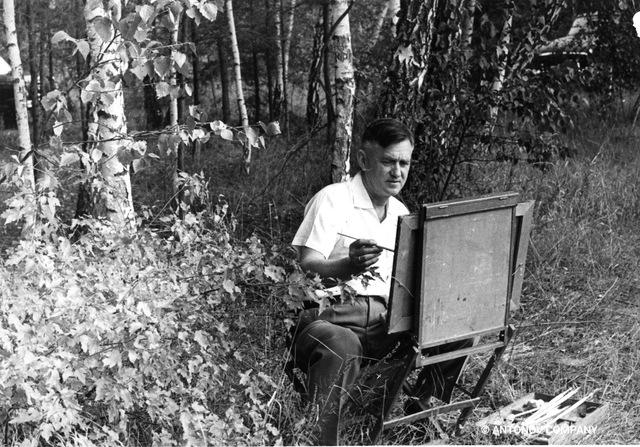 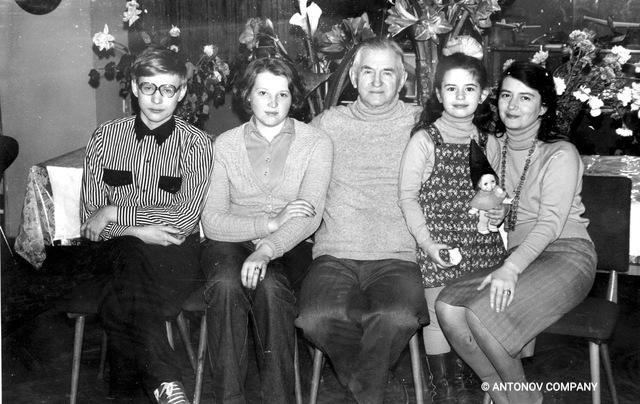 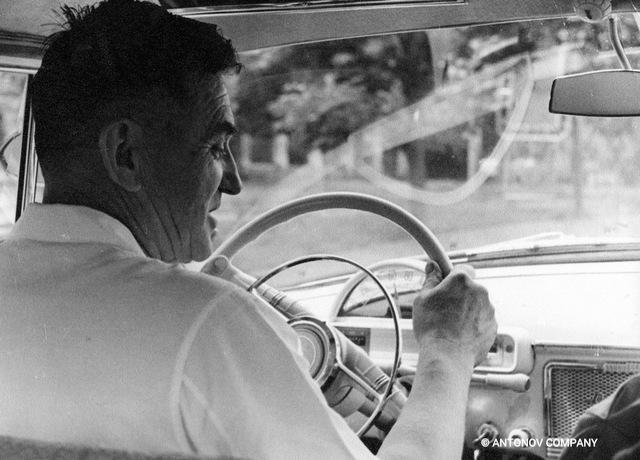 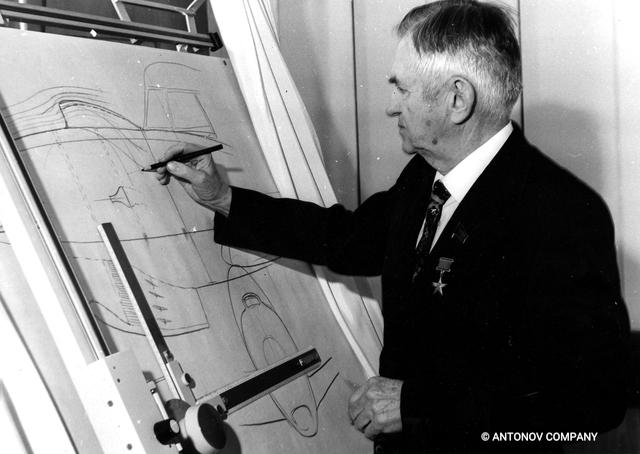 O.K. Antonov combined designer career with social, cultural, socio-economic activities and teaching. O.K. Antonov is a holder of 72 certificates of invention and 10 international patents. He is an author of three books and more than 200 scientific and popular science publications dedicated to various problems of design, ergonomics, ecology, technical aesthetics, economics, culture and arts. 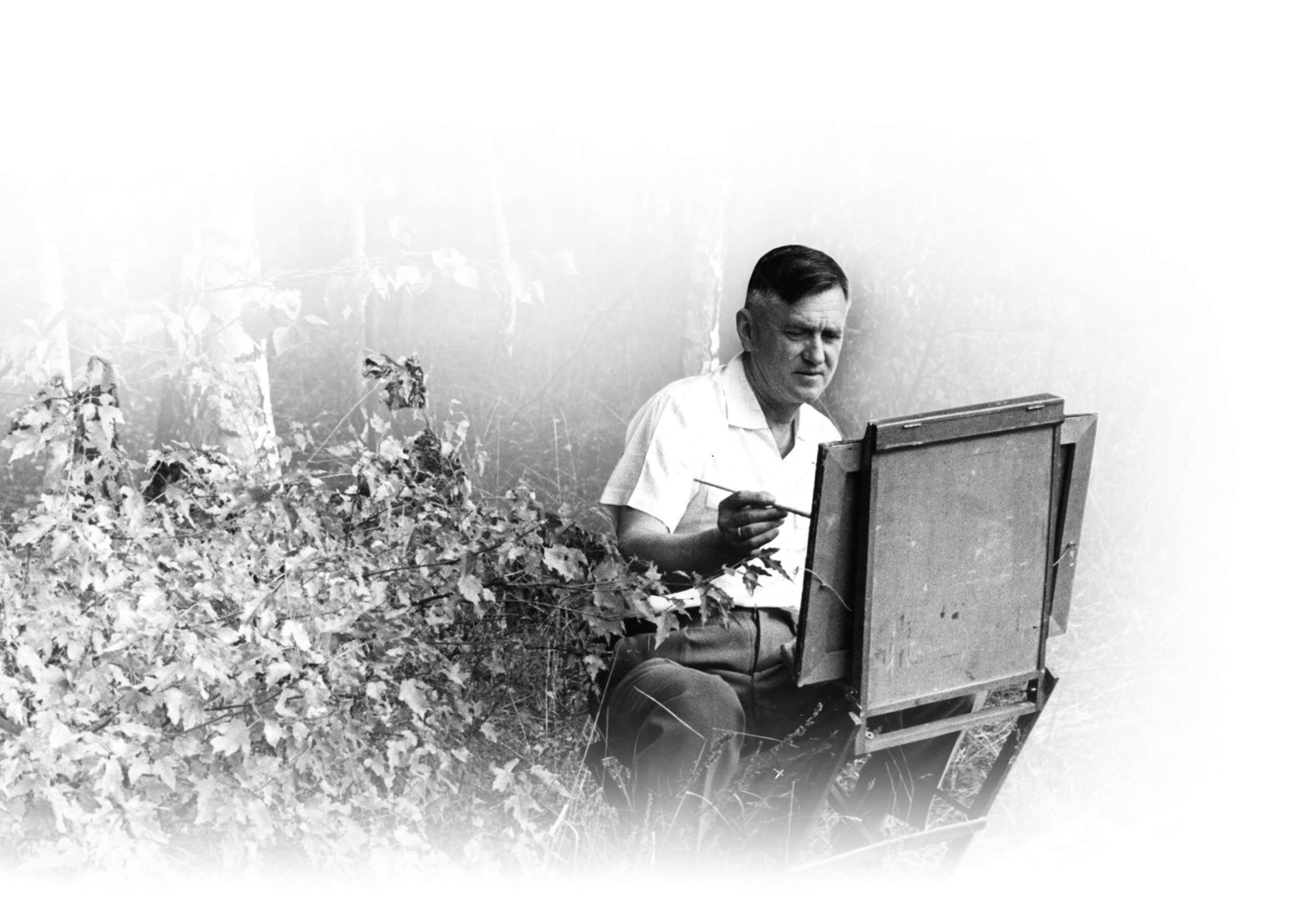 In addition, Antonov was successfully working in the field of professional training of skilled aviation engineering personnel for aircraft industry and civil aviation. He was chairman of the official board of examiners at Kharkiv Aviation Institute, professor and head of the Institute sub-department, and took an active part in the work of Kyiv Institute of Civil Aviation Engineers, Mechanics and Mathematics Department of Kyiv State University, Institute of Mechanics and Hydromechanics of the USSR Academy of Science, etc. In November 1965, Antonov signed an open letter to the CPSU Central Committee protesting against political repressions against representatives of the artistic intelligentsia of Ukrainian SSR and discrimination of the Ukrainian literature. As long as he lived, Antonov was putting incredible effort in restoring the memory of Igor Sikorsky in the history of Ukrainian aviation. Antonov was among active advocates of the movement for protection of the unique Lake Baikal against its contamination with the pulp mill wastewater, standing up for protection and conservation of natural resources.

If not for designing, I would like to become a painter O.K. Antonov

Oleg Antonov’s legacy includes not only a unique school of aircraft construction, but also his own personal example of a many-sided creative personality for future generations. O.K. Antonov is the author of more than 100 paintings. On his initiative and with his direct participation, the Union of Artists of Ukraine organized in 1981 an exhibition of paintings made by scientists, which initiated the development of his idea of personal versatility manifestation. 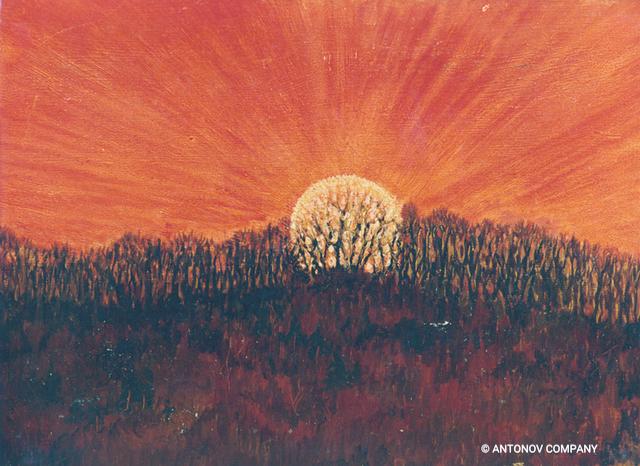 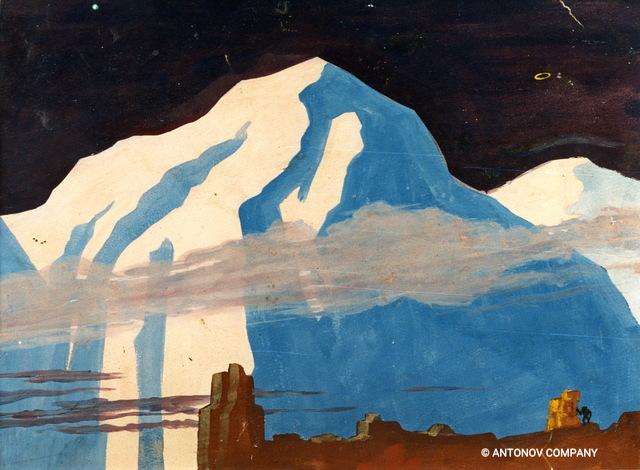 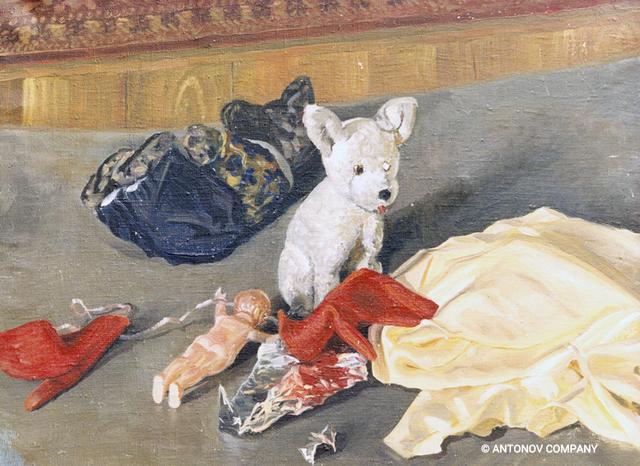 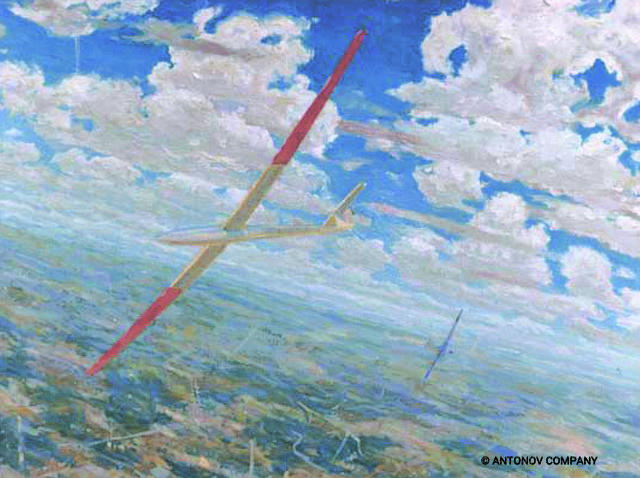 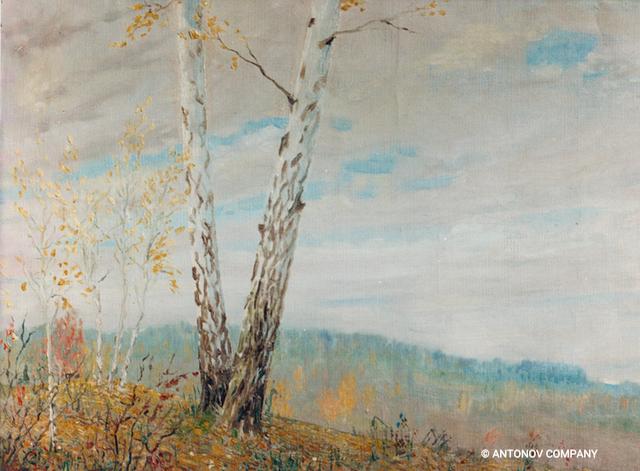 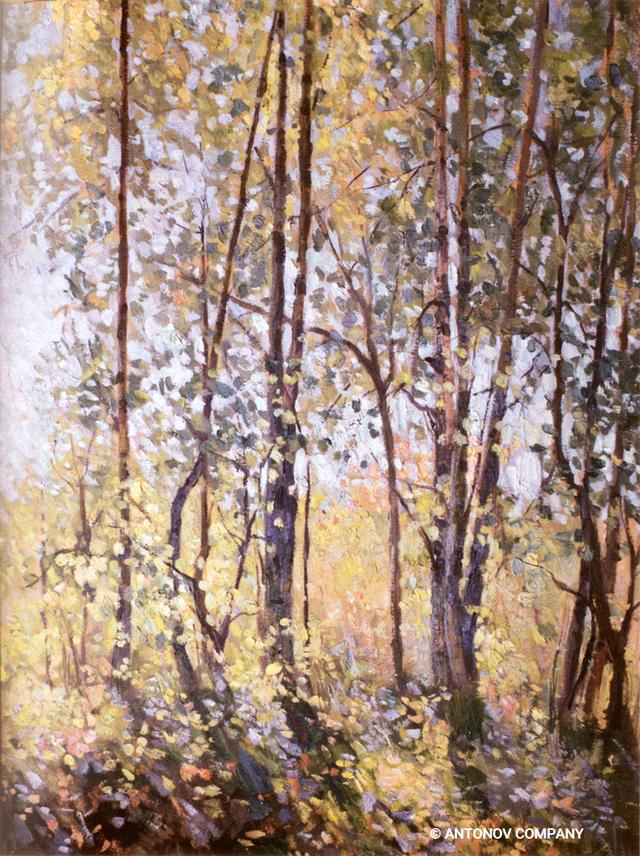 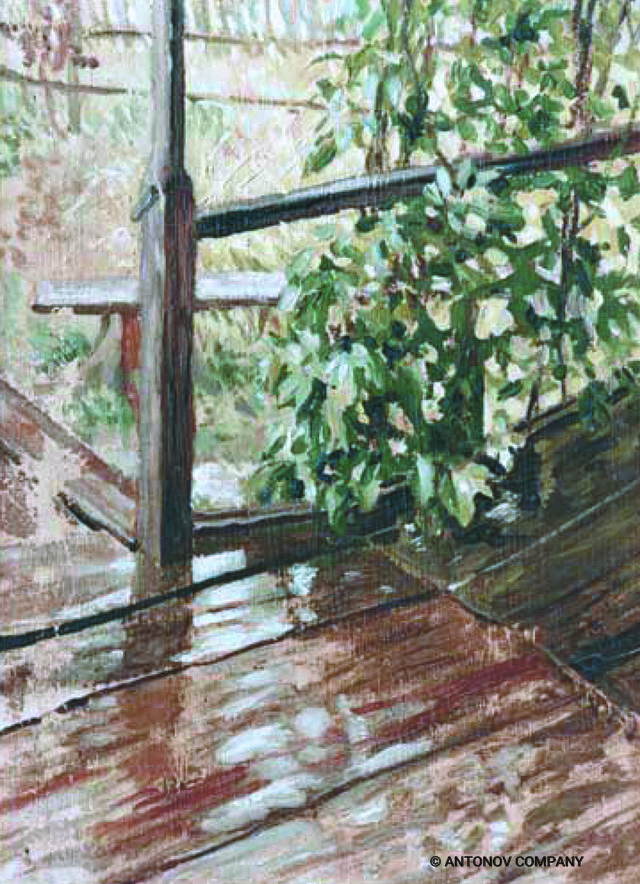 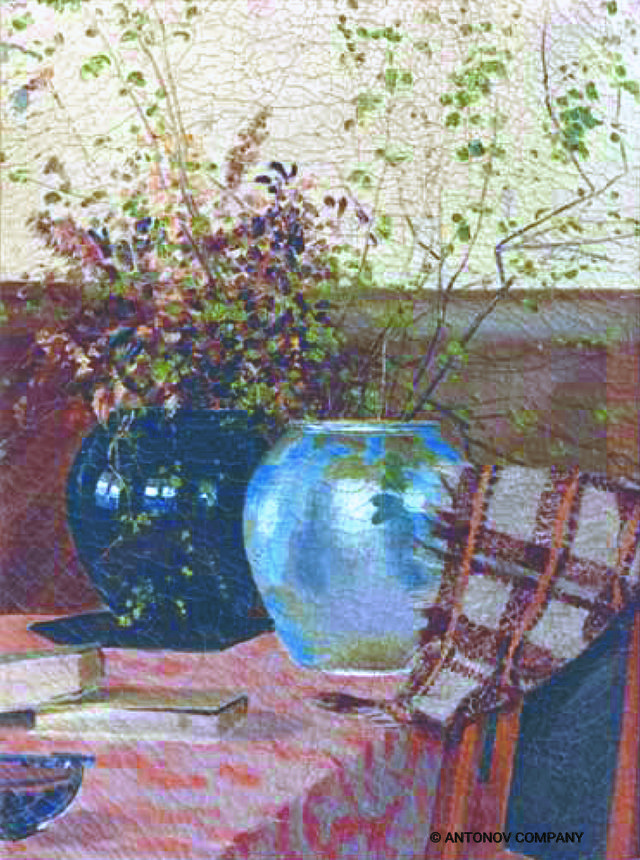 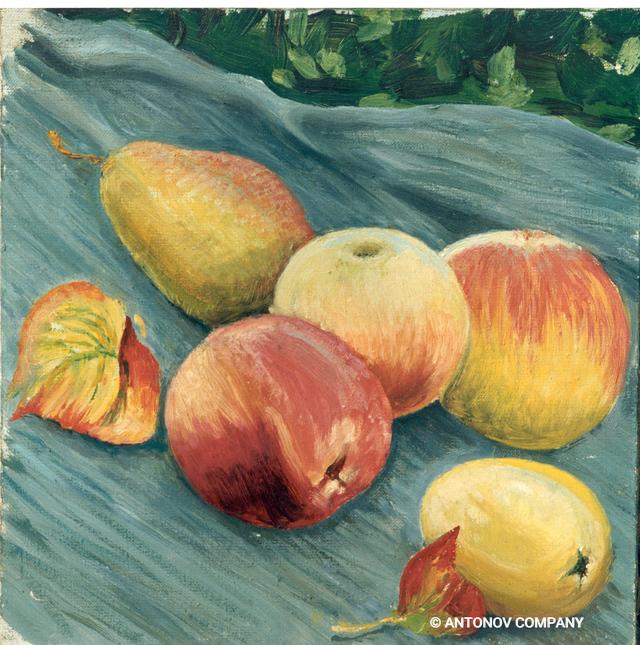 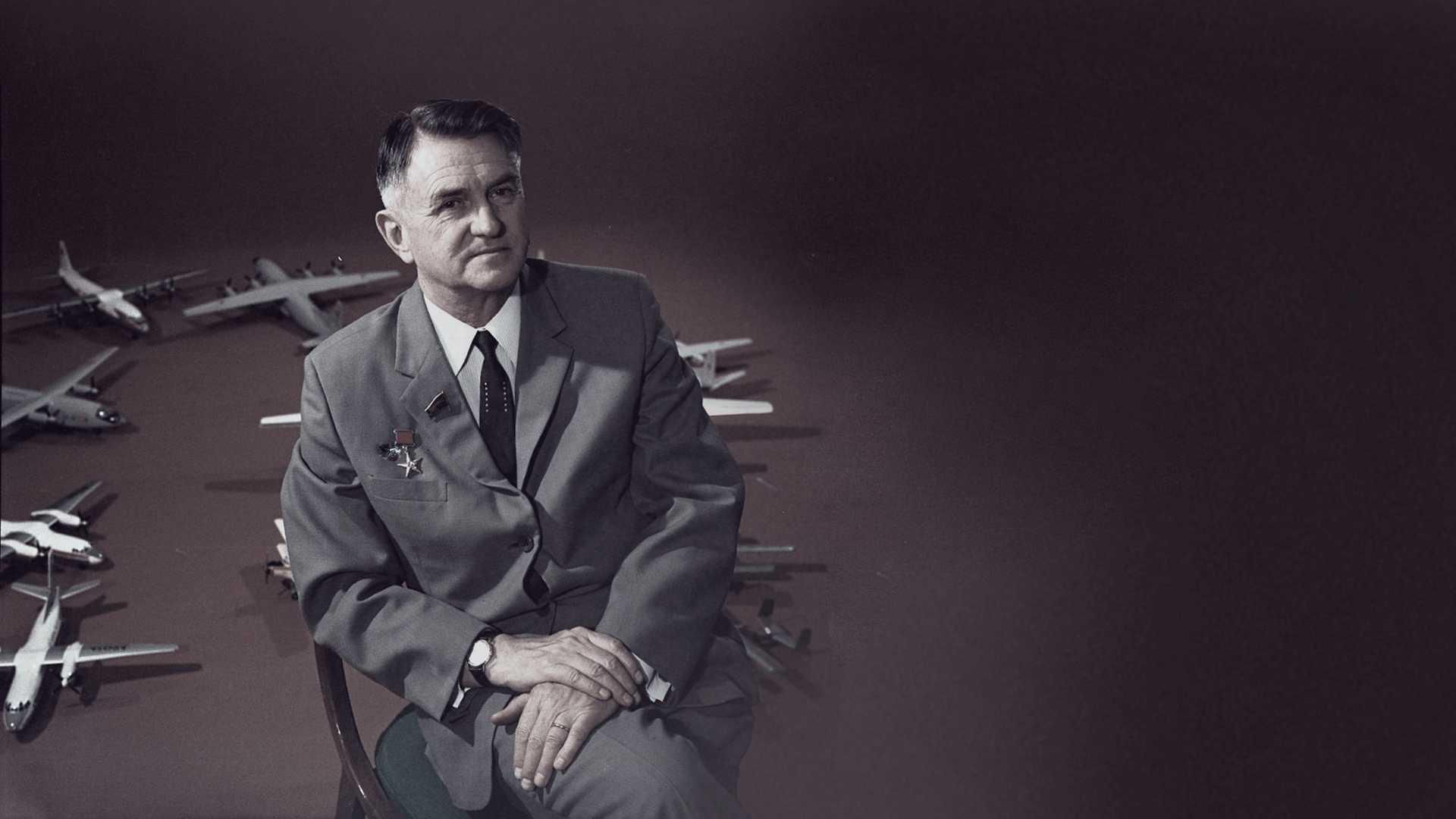 Oleg Konstantinovich was a multifaceted person, combining a deep knowledge of technology with art. Mykola Amosov

The memory of the outstanding aircraft designer, scientist, artist and writer is immortalized in the Hall of Fame of the USA Aerospace Museum (San Diego, California). The International Association of Cargo Carriers in the US city of Miami awarded its highest decoration – the Scroll of Honor – to O. Antonov. Minor planet No. 14317 (3 km in diameter) discovered by scientists of the Crimean Observatory in 2003 was named after Antonov. In 2016, the State Museum of Aviation of Ukraine was also named after O.K. Antonov. Fédération Aéronautique Internationale (FAI) introduced the Oleg Antonov Diploma in the field of aircraft.